After staying a while in the US, the author returned to India, the country he was born, raised and spent his formative years. As it happens, something he was so accustomed to suddenly felt new and needed practice.

He then proceeded to give me a brisk but thorough body frisk with a portable metal detector that would put any American Airport  TSA personnel to shame.
Before I realized what happened, the man had done his job. He gave me a polite bow again and opened the door of the hotel as I looked at him bleary eyed and disoriented after my transcontinental flight.
The multistoried hotel was located just across the largest technology park in Hyderabad. I looked out of my room window at the rows of huge buildings across an empty road. It was late in the night but most of the buildings across the road were lit up, their glass edifice shimmering brightly against the night sky.

END_OF_DOCUMENT_TOKEN_TO_BE_REPLACED

I had decided to give another shot to the IIT joint entrance examination.
Indian Institute of Technology’s or IIT’s are a group of elite engineering colleges in India. The admission to the institutes is through a joint entrance examination, universally acclaimed as very difficult to get through.
I did not get through IIT last year and accepted admission in one of the state engineering colleges. This college was in a beautiful campus that was tucked away in the foot hills of Himalayas. On a clear day we could see the outline of the snowcapped peaks.

END_OF_DOCUMENT_TOKEN_TO_BE_REPLACED

Notes From India : How About A Raise ? 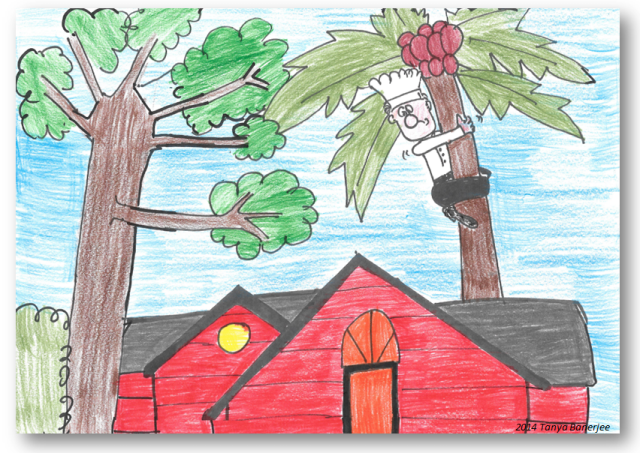 Prologue:
‘Storyteller … tell us the story about their stay in India’

END_OF_DOCUMENT_TOKEN_TO_BE_REPLACED

If you grew up in the generation when the whiteboards did not exist, then you surely know about the blackboard. We understand this post does not advocate a cause in favor of education or an opinion on the systems of education. But it does beautifully narrate the existence and importance of the blackboards for those of us who went to school or college in the times of the “blackboard”.
I have a fascination for the black board. The omnipresent center of attraction in the classrooms, almost sacred by the virtue of its limited access that demarked the teachers from the lesser mortals.
Countless times I had watched with fascination as the chalk transformed itself into dust, leaving ephemeral impressions that would last for less than an hour on the black board, but much longer in our minds.
Writing on the black board was an art in itself. Those expert in the art almost used the pauses between the impressions they made on it, as time to let a particular concept sink in. The concepts magically materializing in our minds a split second before materializing on the board.
Then there were others who used the medium for written dictation as the students furiously scribbled down the words of knowledge and wisdom from the blackboard before those words were wiped off to make space for more.
The black boards were very black in the hundred and fifty year old boys only convent school where I did my schooling from. The chalks were thick, soft and created a awful lot of dust. In fact, for a long time I had assumed that the reason the tunics of the fathers, brothers and sisters of the convent were white because it would be easier to go unnoticed after wiping the chalk dust from their fingers into their habits.
“Why did they assign Navy blue blazers for our uniform then” , I often used to wonder.
The blazers used to get stained with chalk by the end of the school day, much to the annoyance of the parents. If one was particularly lucky to got caught focusing on anything else apart from the blackboard, the punishment, was to be assigned to a space next to the blackboard , facing the class, where one was unable to see what the teacher was furiously scribbling, but at the same time get thoroughly drenched in the chalk dust.
After my school days, I managed to get admission in one of the coveted engineering colleges in India. The black-boards there were modern and were actually green in color, often stacked two or three on top of each other, and each could be individually pulled up and down by a pulley system.
Multiple boards gave a lot of time to the students to scribble down the words of knowledge and wisdom from the blackboard before those words were wiped off to make space for more. It also gave us sufficient time to sneak out of the class while a professor was busy writing a particularly lengthy passage on the board with apt concentration.I used to often silently admire the fact that someone can fill in four blackboards worth of information in one hour!
The chalk in my engineering college was thinner and harder, often making squeaky sounds especially while materializing into a particularly long mathematical formula. Also, the chalk dust was significantly less.
This light-weight chalk also doubled up as projectile ammunition that could be thrown at a person. In fact this was a very popular use, especially in the first year of college when several such projectiles were tested on the girls in the class who usually sat in the first bench of the class. I was in expert in this projectile art and often practiced on the lone girl in my class, the girl I eventually ended up getting married to.
My next encounter with black boards was at MIT. Here, there were a mix of black and green boards , mix of thick and thin chalks and in some classrooms pulley systems that stacked up four blackboards one on top of other !
But times had changed. In majority of the classes those magnificent black boards stood dwarfed by projector screens where well crafted and rehearsed slide shows materialized. There was no need to take notes as the lecture slides were available to all the students.
I had just completed my Master’s thesis and had to do a dissertation. My presentation was up just before the lunch break. As I entered the room during my allocated slot, I was surprised to see more than a hundred people in the lecture hall. I started hooking up my laptop with the help of the technical staff and we found out that there was some glitch in the projector setup. The projection screen would not unfold despite several attempts.
As the clock ticked through the futile attempts, the restless din in the room got louder and louder.
I looked longingly at the fixture on the roof just in front of the black boards, from where the currently inoperable screen was supposed to appear.
“Why me?” I thought when suddenly my gaze fixed into the three level stacks of black boards just behind the projector screen fixture. Looking at them, I realized that these boards were not green – they were actually black!
“I guess we will do this the old fashioned way!” I addressed the classroom as the din gradually died away.
I briefly paused to glance at my Navy-blue Blazer, and picking up the soft chalk from the podium, I walked towards the blackboards amidst an applause.

Story Credit And Sketch Credit : Prithvi Raj Banerjee.  He is a storyteller and plans to author a book some day. He is also a photographer and a cartoonist. In his blog ‘Tales from Near & Far’, he writes & illustrates stories inspired by incidences from his old and new homes, as a tribute to people who continue to make homes under new skies. 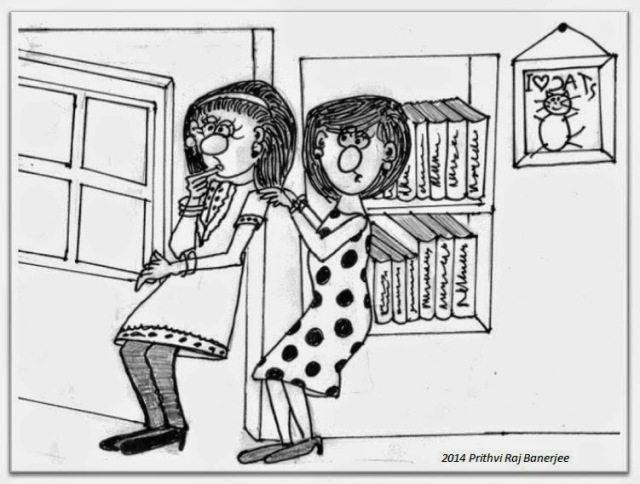 ‘How do we get our Gross Margins up by five percent?”, the dimly lit study was filled up by my CEO’s voice.
It was a global management call and I could sense the rapt attention of all my colleagues, dialed in from all across the world as I prepared myself for the answer.
‘Can you get the ladoos now …’,  I looked in horror at the smiling faces of my eight year old daughter and her best friend. ‘… lots and lots of them …‘
I struggled to mute my speakerphone.
****
It was Janmashtami and the kids had a day off from school.  The birth day of Lord Krishna was being celebrated across India with reverence and gaiety. In our house in the suburbs of Bangalore, however, it was somber corporate quarter ending.
Both me and my wife work from home. We have our own home offices in our tree shaded villa in the outskirts of Bangalore.  Her’s in a corner of the master bedroom suite , and mine, more isolated on the first floor.
‘I am bored’, my daughter had come up into my office earlier that day.  Born and brought up in the US, she was beginning to build up an Indian accent.
‘Today is Krishna’s birthday’, I had winked at her, ’Why don’t you celebrate it?’, I suggested. A celebration with dolls would keep her out of my way since it was going to be a busy work day for me.
‘I will get you some sweets – you know- Krishna loved sweets’ I made a mental note to pick up some laddos on my way to getting the new ink cartridge for my printer.
Her eyes lit up. ‘But I will need Gauri’s help for the party’, Gauri was her classmate, neighbor and best friend.
I had patted my back at the inspired idea as I imagined my eight year daughter staying busy, learning about culture, and more importantly, staying out of my way.
****
‘Sorry..I am having some problem with the phone line – give me five minutes … ‘, I mumbled and muted the phone. The study had now filled up with the chatter of small girls.  A LOT of small girls. There were at least twenty five of them standing outside my study
‘We are having a great time, uncle’, Gauri chirped,  ‘ We put up Krishna pictures on the walls, sang Krishna songs, even had a Krishna quiz  !’, she said pointing at  her iPad.
‘I won …  a cute little girl with braids raised her had’
‘Now we are going to have a dance for Krishna’, my daughter quipped in excitedly ..’ , It is on the song  You belong with me by Talyor Swift …. we are all singing it for Krishna not for a boyfriend or anything .. you have to come down Baba..’
My lips curled into a smile as I glanced down the mezzanine floor into the living room. The room was filled up with more girls. My wife was sitting on the couch surrounded by an eager battalion of six to ten year olds from our neighborhood. She looked at me and rolled her eyes. I had to struggle not to laugh.
‘Give me a second’, I stepped back in the study and unmuted the speakerphone. ‘Guys I will have to dial out now – some unanticipated emergency at home ..’
‘Hope all is well ….’
‘Cannot be better’, I thought as I hung up the phone and ran downstairs with the chattering girls.
Author
Prithvi Raj Banerjee is a technologist and an aspiring author. His collection of stories, inspired by incidences from around the world, can be found at http://pbnerge.blogspot.com.
March 24, 2014 1