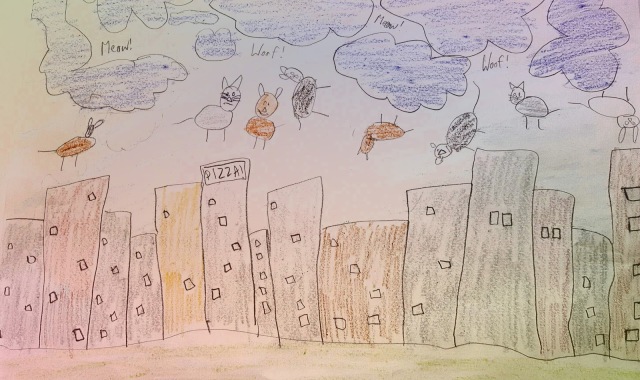 Children’s Writing Festival : Story #4
Written By : Avani. She is a voracious reader, she actually does not read books. She eats them up. So it isn’t a surprise that she is a fabulous writer too. Her writing has been published on our blog before as well.

“It’s raining cats and dogs!!” I screamed. Images of beagles and poodles falling out of the sky flashed through my head. My mom just stared at me. I quickly threw on jeans and a sweater while still thinking what dog I would like. ”Honey, be careful. It’s wet outside and wear a jacket”, Mom shouted after me. Maybe once the dogs and cats flew out of the sky, they peed almost immediately and hence the wet part. But the jacket part made no sense whatsoever. I called my friends and told them it is raining cats and dogs. Like me, they screamed in delight. We all ran outside and saw….

WATER all over! What! Why didn’t anyone warn us? Wait! What if this was all pee? I told my friends and we agreed that it was a reasonable explanation. We ran all over our neighborhood looking for the place where it was raining cats and dogs. At one point, a cat fell out of a tree. Maybe all animals got stuck in trees and we just had to shake them to find out. So, we went around shaking trees. Well, a bunch of people were staring at us like we were maniacs. Yeah, it probably looked pretty weird to see a group of girls shaking trees around. After shaking all the trees a few cats had fallen out. “Come on girls. I think we should go home”, I said sadly. Once I reached home, I shouted at my mom, “It was not raining cats and dogs. It only rained cats!” My mom was staring at me and suddenly burst out laughing. “You actually believed that saying? It just means that it’s raining a lot”, she said in between her laughter.
OMG! This is so not fair. I thought that this would be my chance to get a dog. But nope! By the way, I could have convinced mom and dad that there would be a ton of stray cats and dogs and they might get killed if we all didn’t pitch in and help. But it all couldn’t happen as it ended up to be just a saying. I got my sketchbook and mechanical pencil (does that count as an electronic?) and started drawing a scene where actual cats and dogs were raining. I showed my mom the picture and she said,” I might just have a little surprise for you” OMG! What if it was a dog? Well, it was a dog, but a stuffed animal! To make mom feel good I acted really surprised and happy. But mom said the actual surprise was a real dog. We were going to the shelter later in the day. Best surprise ever!!!
After that I decided to write about the whole experience. Just as I finished writing, my dad came home and it was time to go to the shelter. I was working on finding the perfect name and had it by the time we reached the shelter. It was .. SCRUFFERS! It could be for a boy or a girl. Mom’s only condition was that the dog shouldn’t shed. Luckily one of the shelter’s dog was a poodle and it had a litter of puppies recently. I picked the one who seemed to really like me as when I said Scruffers, it nuzzled against me and licked my hand. So we picked this puppy up along with few other things the puppy would require and bought it home. This was the best day ever!