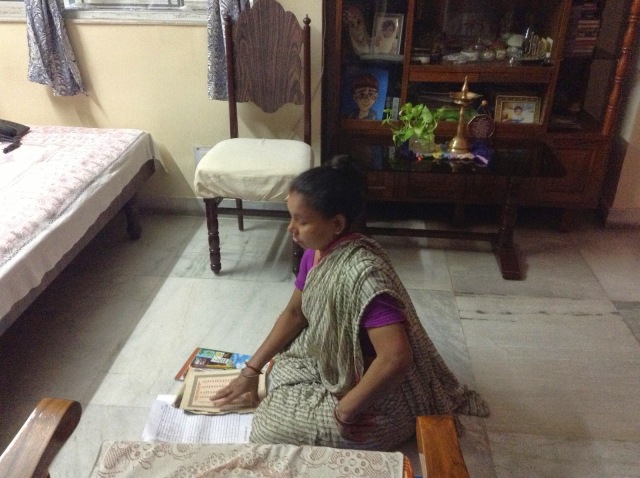 Sumitra, a stockily built forty-five year old, very contented, never complaining woman, is my present house help  Her husband is a few years elder to her and is an inveterate drunk. In her own words,”is the most wretched person God has ever created”. He is jobless, does not do any work but eats, smokes, buys prescription medicines with her money, and beats her and turns her out of the house often. She wonders where he gets the money for the drinks, because no one would give a penny to such a vile person. Still she does not complain.
Her twenty-two year old son is married and has a son of his own but his wife has deserted him. He also does not like to work, sits at home, watches television, day dreams and criticizes his mother for not providing enough good food. Her daughter is happily married to a cab driver and has a two year old son. This is a very common scenario among the economically backward working communities here in India.
Are you wondering why I am writing about this girl during the education week? Here is why.
Sumitra is quite a unique character. She was born and brought up in a mega city but has remained illiterate, many a time exploited for that reason but never complaining. Her only dream is to learn to write her name  and her family members’ name secretly as she wants to give a big them a big surprise and also read to them the “Laxmi’s Panchali“, the booklet praising Hindu-Goddess Laxmi. Upon knowing this, I took this as an opportunity to enable her by making her a literate.

Reading of the booklet is important to Sumitra, important enough to encourage her to learn to read and write. She is not God fearing but believes in total surrender to God. I asked her whether she ever feels angry as other people have so many things and she has nothing. She said she manages to arrange two meals a day for her family, though it is meager rice and potato, but there are people who do not get even that. She is thankful to Lord Shiva-Hindu God, who she worships, providing her all she needs.
So one evening, after her work, we start her education. In my 14 years of teaching, I have not come across such a simpleton. Once in ten days or so she manages to find some time to study and obviously by then she has forgotten what she learnt ten days back. I do not blame her for that as she works in seven houses including her own but sometimes she tests my patience! Anyways, after a lot of perseverance from both sides we have progressed a little. Now she knows to read and write a few simple words, her own name, her husband’s and son’s name. But she is not confident yet to write in front of anyone other than me.

I also promised her I would help her open a bank account, which she thinks is the ultimate fulfilment of her life. When I told her about my visit abroad for more than two months, she was not ready to believe at first but then said, ‘Please don’t forget me and talk about me at least once a day.’
In more than forty years of my married life I have handled many house helps, but Sumitra is different. I almost envy her sense of contentment. I recently read the much talked about Indra Nooyi interview,a well educated and a highly successful woman mentioning about the sacrifices she made in life and still did get everything she wanted. I thought of Sumitra as I read that interview. Sumitra who is happy to be able to barely spell her own name, Sumitra who is surrounded by adversities in life yet she is the one who sleeps the most content at nights.
As a teacher, I could not have asked for a better student than Sumitra. She inspires me to look at life so very differently. Charity must always begin at home. Enable some one, educate them. It may change their life in many little ways. For me, I hope in the coming months, Sumitra will learn to read the religious booklet, have a bank account, sign her own name and be less exploited.