The True Story Of The Three Little Pigs

Our 70th story on the blog is an extra bit special. The author and the illustrator is just seven years old. When we met Aarushi, she told us she was looking for a publisher to publish one of her many handwritten and illustrated books. We told her we were not real publishers but we could at least attempt to have her story read by many many people.She has written two posts for us before (Sweet Nothings and Piano Lessons) so she knew what we meant and she shared today’s story. She has also asked us to keep looking for a “real” publisher.
We truly believe, children are amazing and great storytellers. Their imagination is limitless which is reflected in their story telling. Here is one such story with a twist on the original story of The Three Little Pigs. 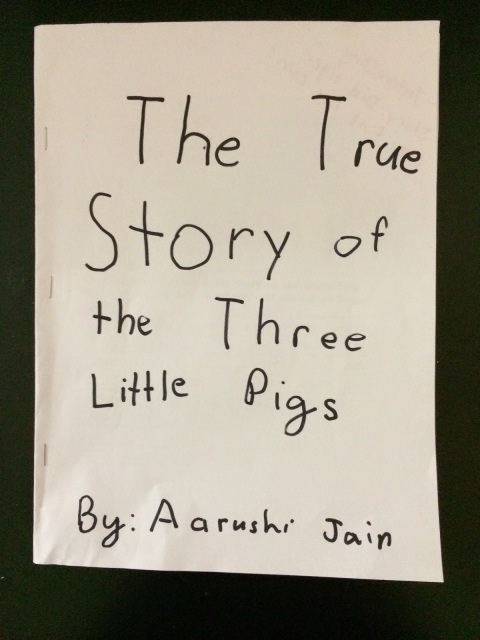 Everybody has read the story of the three little pigs, but nobody has heard the real story, it all began when I Ashly the tiger was making some soup. I checked in the cabinet for some corn. “No corn”, I shouted. I went crazy for two minutes. I cut some other vegetables. I had to bring sweet corn soup to a picnic.

I went to my neighbor’s stone house to ask for some corn. “Hello” I said. Then I took my helicopter out to play. One of the edges accidentally hit one of the stones (of the stone house) and the whole stone house fell down. The kitchen was still then. There was no pig,so I checked in the kitchen for corn. But there was no corn. 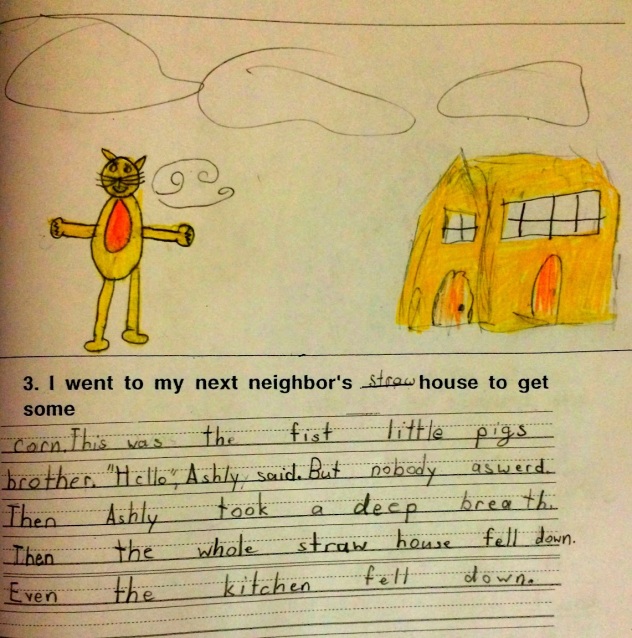 I went to my neighbor’s straw house to get some corn. This was the first little pig’s brother.  “Hello”, Ashly said. But nobody answered. Then Ashly took a deep breath. Then the whole straw house fell down. Even the kitchen fell down. 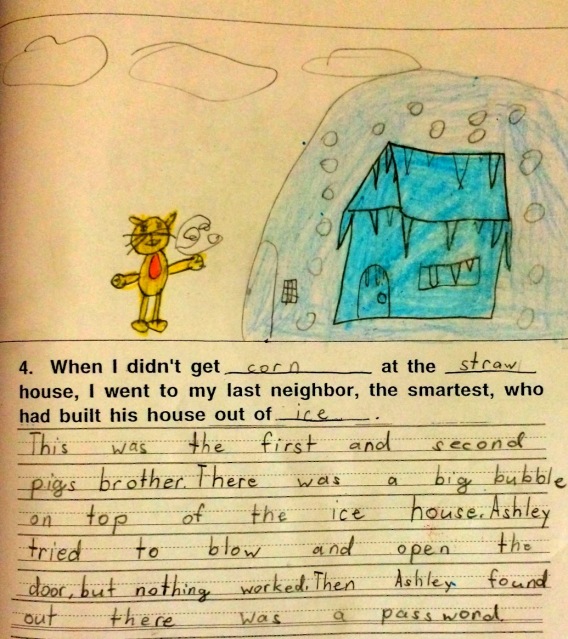 When I didn’t get corn at the straw house I went to my last neighbor, the smartest, who has built his house out of ice. This was the first and second pig’s brother. There was a big bubble on top of the ice house. Ashley tried to blow and open the door, but nothing worked. Then Ashley found out there was a password.

She pressed the buttons, but she could not find out the password. She came on newspaper. Then she went to jail.
About The Author And Illustrator : Aarushi Jain is seven year old, second grader. She loves to write and wishes to become an author one day. She started writing books of her own since first grade and has completed writing 10 books so far. She also always illustrates her own story books.Besides writing, she is a voracious reader and Dr.Seuss is among her favorite authors.
If you happen to know a children’s book publisher,  please email us the details at chatoveracuppa@gmail.com

One thought on “The True Story Of The Three Little Pigs”