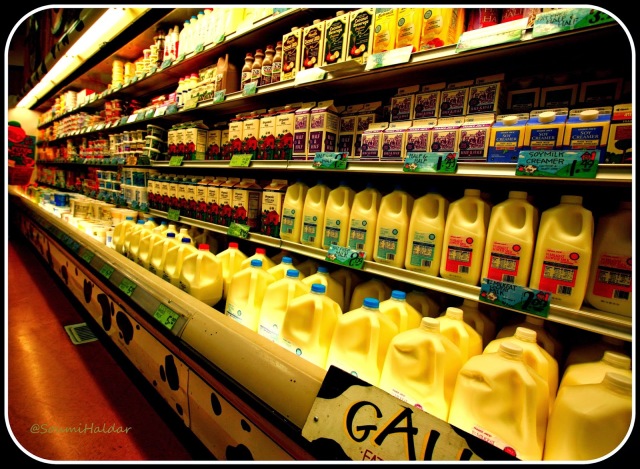 I had almost wrapped up my weekend grocery shopping when I realized I had missed picking up milk and yogurt. One quick sprint to the dairy aisle and then another to the register and I am out of here, that is what I had thought at that moment. But what transpired thereafter took me much longer. The shelves were empty and milk was being restocked. So I was asked to wait for five minutes or so. As I stood there texting the husband, I could hear fragments of conversation happening between the two elderly couple next to me.
Both were parents to Indian children who had now settled in the US and had built a home away from home. Both were visiting their children for a few months and would stay for the grand children’s summer vacation, as it usually happens.  I could gather that both sets were mere acquaintances and had only met in the store few minutes back. But that did not hold them from regaling tales to each other. Yes, I could have walked away from them. But I did not because I was intrigued by the conversation between them.
A conversation that I have heard many times before. One set of parents complaining about the busy lives of their son and daughter in law, the infinite number of classes that the grand children attend, their hurried one pot meals, their chaotic mornings, restless evenings and endless conference calls. All of that left very little time for the elderly parents. But they were quick to mention that in spite of all that the children and the grand children did their best to spend time with them, the grand children were fond of granny’s cooking and grandpa’s anecdotes and chess games. They had also made friends with the neighbors for their evening stroll and that the daughter in law was more doting than their own son. (Always good to hear, isn’t it).
Still there was a nagging, complaining tone behind it all.  It was not so much about the paucity of time in the life of their children. It was made to sound as if the children were careless and non-dutiful and the parents felt neglected. It was as if their own child was depriving them of some quantum of love and affection.
My own father who was visiting me few months back had witnessed a similar conversation while he was here and had said to me then “Who in the world laments like that about their children in front of total strangers? I would much rather brag about what you are good at instead. It is my age to rejoice your achievements and my grandchildren.”  And that is exactly the sentiments I heard from the other couple. They hit the point home and yes at this time I was completely eavesdropping on the pretext of finding the right organic brand of milk and a select kind of pepper jack cheese.
The other couple said as a matter of fact “We were busy when they (the children) were younger. Sometimes or many a times we did not have all the time they needed. So we understand how my son’s life spans up now. He has a career to keep (exactly the way it is these days), home to run and children to rear. We like it here because it lets us pamper and enjoy the grandchildren and get all their love. We love spending the few months a year here as a nice big family. And after all we always wanted our son to do well and that is what he is doing, so why should we complain? ” At this time the lady chimes in as if to moderate the conversation “I am a retired school teacher, you know. So I help with the children’s homework after school. It makes me so happy to be teaching someone again.”
I was now compelled to walk away. No loitering any more. It was bound to become obvious otherwise.
There is a reason I choose to share this story today. Why do you think the experience of one set of parents is so different than the other one?
This is what I think. Love and affection is a mutual, two way process. When has it ever happened that you love your own child unconditionally and the child does not reciprocate it back to you? The worldly challenges of today’s life and the restlessness of today’s life style often gets misinterpreted as lack of love and respect by some parents. Is that fair to their children? I personally think not. The relationship between a child and a parent is always without demands and conditions. I choose to be there for my parents, sometimes physically and always in spirit or over Skype just as they are and have always been there for me unconditionally. Rain or shine.
Their home is as much mine as mine is theirs. I still love to go back home and be in my Pj’s all day doing nothing, pretending I am a teenager all over again. They love to come to mine and stay as if it was their own.  My kitchen is hijacked, my garden looks greener, the house is noisier, the kids are happier, the husband is on a culinary trip and it just makes me happy to see all those simple things happening. The day I have to plan their stay or they have to plan mine, we will be as good as any other house guest.

This post has been authored by Piya Mukherjee, one half of chatoveracuppa. She is a busy mom along with being an avid blogger and storyteller.